Association of Women Sandglass and Network women of Rasina District received fund for the project on the competition for the United Nations Fund for the Elimination of Violence against Women (UN Trust Fund to End Violence Against Women). The project will last for two years, from 1 January 2015 until the end of 2016.

The aim of the project is to improve the care and support for women in situation of violence, including Roma women, women with disabilities and women from rural areas by encouraging institutions and agencies to act more efficiently, increasing the availability of psychological and legal assistance provided by women’s groups and increasing the accountability of the media in reporting on violence against women.
Partners in the project are the Women’s Network Against Violence in Serbia, organizations from Network of women of Rasina District – Romani cikna, W as a woman, Aleksandrovac and Youth with Disabilities, Trstenik and informal women’s groups in Varvarinu, Cicevac and Brus. Also, we planned continuous cooperation with the institutions and bodies for gender equality and other non-governmental organizations in the district.
Final report 2017. 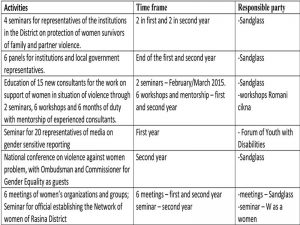